I come from a country where cycling is not a common activity. Yes, some people do cycling in groups as a sport or in vacations on the beach but not as a daily transportation. Initially, I had mixed emotions about the idea of riding a bike. I was excited because it involves physical activity and in Honduras, I was spending minimum two hours per day in a car… but I was also a little nervous because it was a while since I ridden a bike and certainly it was not in a city with heavy traffic of cars, trams, bikes, and pedestrians.

Renting bikes: My first bike ride in Amsterdam was with a rented bike, just to give it a try. At first, I was feeling tense, I was holding tight to the handlebar, it was difficult to maintain the bike steady, and the seat was too high so I barely touch the floor, which made me more stressed because I felt I didn’t have control and could fell at any time. But well, I managed and survived. We hung around for the three hours that we rented the bikes, and on the way back I was starting to feel less stressed, just a little less. But it definitely helped as a first step. Renting bikes might also be helpful if you want to try handbrakes or pedal bakes, if unsure on what you prefer.

Bike shops: In the next weeks we visited some bike shops in the city center finding a huge variety of brands and prices, from the simple and classic to fancy gear, electrical and modern! So make your budget because you will fall in love with so many cool bikes out there! We were looking for a cheap one because anyways, they say that it’s highly probable that it will get stolen at some point. And since bike trafficking is so common, you also have to be careful when buying second-hand bikes (you don’t want to help them keep that business growing). I got mine in the Waterlooplein market in one of the shops, there are many sellers in the street but also many bike shops, at least I have somewhere to go back for claims or repairs.

Buying from FB groups: Personally, don’t recommend this. I was looking for bikes there and decided to met with a guy who was selling “his bike” with the typical story: “I’m moving out of AMS”. The person who went to show me the bike was not the same guy from the Facebook profile picture… he was in a rush and rude when told him I didn’t want the bike. Plus, the bike was looking as if it was recently painted to another color, is this a red flag? 🤨 And then I kept on following this group and the same people is posting over and over different bikes…

General things to keep in mind when buying a bike and accessories, especially if it’s a second-hand bike:

I requested my bike seat (saddle) to be very low, that is how I felt safe at that moment, being able to put both of my forefeet on the floor. I rode like that for two months until I started to feel like needed to pull it up I observed how people were managing the height of the seat and reading about this. Now I know you should be able to extend your leg almost completely while pedaling, it even makes it easier to ride and you put less stress on your knees. Of course, it took me some practice to feel confident in my bike but now I only reach the floor with my big toes.

In my bike wishlist, I had a basket, and I really liked how the wooden ones look, more than wicker. And I got one, which ended up removing after some weeks because it’s too heavy for me 😦 So if getting a basket, consider the extra weight. 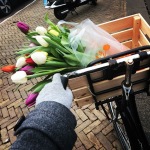 Speaking of… my bike, in general, is so heavy 😖 I strongly recommend you to get a lightweight frame, mine has been a great exercise for my legs, but I’m getting tired of it, especially when I have to travel long distances 😪

Other things to check is that your bike must have a working front and back lights and reflectors. Must have a working bell. Wheels should be aligned and rinks straight and steady. Thicker-fat tires give you more stability, thinner tires help you go faster.

To tock your bike you need a back wheel lock which comes attached to the back part of the bike and a chain lock or U lock which is to lock the front wheel and frame to the parking rack or something solid from where your bike cannot be lifted from. Get good quality ones, it can prevent your bike from getting stolen, based on my experience…

I was beginning to think that bike trafficking in the Netherlands was a myth… silly me… Friday, 3pm. I went to have a coffee at Starbucks and parked my bike attached to a bridge. After approx. two hours I went back to my bike and I was not able to unlock the chain lock, my keys were not working and noticed that the back lock was opened and damaged… Just then I realized that they tried to steal my bike!! Thanks to my front chain lock that they were not able to open, I still have a bike.

Visiting a bike repair store. You can usually go back to the place where you bought your bike for repairing stuff, but what if you chain breaks or have a flat tire and you are far from that store… you’ll have to visit the nearest one.

If you live in a bike-friendly city and you are still driving a car or commuting, I strongly encourage you to give a try to biking! Particularly Amsterdam, the city is designed for bikes, yes, there a lot of things that you need to be aware off in your surroundings, but once you are on your bike you realize that everything flows pretty smooth, so you just need to ride with precaution, pay attention to the signs and in a matter of time you will realize you are just one more fish in the ocean and will experience the sense of freedom that bike rewards!

There’s a bike for every need! 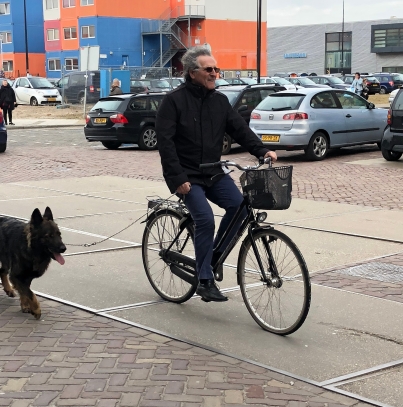 Bike for an adult plus one kind in the front and one in the back! Party of three 👩‍👧‍👦